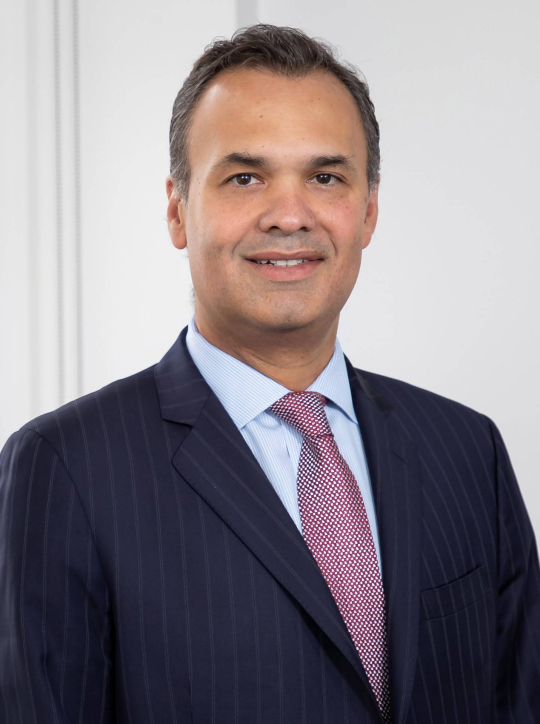 William “Bill” Burck is Global Co-Managing Partner of the Firm and Co-Chair of the firm’s Crisis Law and Strategy Group, the Government and Regulatory Litigation Group, and the Investigations, Government Enforcement and White Collar Criminal Defense Group.  Mr. Burck, who is a member of the Washington, D.C. and New York Bars, is also resident in the New York office.  The New York Times has declared him the modern day “Washington superlawyer” in the model of Edward Bennett Williams, famously known as “the counsel to the situation.”  He is widely recognized as one of the country’s top lawyers and has been named the “D.C. White Collar Crime & Government Investigations Lawyer of the Year” by Chambers USA, the world leader in lawyer rankings, which annually includes Mr. Burck in its #1 tier of white collar lawyers in Washington, D.C.  He has been named for four consecutive years as a top five white collar defense lawyer in the U.S. by Law360.  Benchmark Litigation has named Mr. Burck the “White Collar/Investigations/ Enforcement Lawyer of the Year,” noting he is lauded by peers as “the best of the best” and one of the top trial lawyers in the United States.  Mr. Burck is co-leader of the practice that has been named, amongst other accolades, “Transatlantic Investigations Team of the Year” by The American Lawyer, “White Collar Practice of the Year” four years in a row by Law360, and “Most Impressive Investigations Practice of the Year” by Global Investigations Review.

The international media has called Mr. Burck an expert in cross-border cases, and he is described by leading legal periodicals as a “very charismatic trial lawyer,” a “great strategist in adversarial proceedings,” and a “Trailblazer” in white collar defense and corporate investigations. Additionally, Chambers USA notes that Mr. Burck is described as “masterful, passionate and articulate” in the courtroom and is praised for his “appropriate sensitivity to client needs and objectives.”  Chambers USA further states Mr. Burck is an “extraordinary advocate” who “has a fantastic reputation and he's involved in virtually every large white-collar case that comes out,” adding that "he's always up to speed, tactical and is a very impressive guy."  The national press has further described his advocacy for clients as “brilliant, asymmetrical defense.”

Mr. Burck is a trial lawyer who represents companies, boards of directors and senior executives in investigations, sensitive matters, corporate crises, litigation and other disputes involving the federal and state governments of the United States (including the Department of Justice, the Securities and Exchange Commission (SEC), the Commodity Futures Trading Commission (CFTC), the Federal Trade Commission (FTC), District Attorney’s Offices, State Attorneys General, other law enforcement and regulatory agencies, and the United States Congress) and governments of Europe, the Middle East, Asia and Africa.

Mr. Burck is former Special Counsel and Deputy Counsel to President George W. Bush in Washington, D.C., and a former federal prosecutor in New York City.  In his role as a senior official at the White House, Mr. Burck provided legal advice to the President and senior White House officials on a wide range of issues, including congressional and other government investigations, national security and foreign affairs, the financial crisis of 2008 and complex constitutional questions.  During his time as a senior official in the Criminal Division of the Department of Justice and as an Assistant United States Attorney in the U.S. Attorney’s Office for the Southern District of New York, Mr. Burck investigated and prosecuted a variety of white collar and other criminal cases.  He was a member of the trial team in United States v. Martha Stewart, and was lead prosecutor in a number of jury trials.